(I arrived in Seattle last night at about 10:30….after a 12-hour flight from Madagascar to Paris, a ten-hour flight from Paris to Detroit, and another 4 ½ hours to Seattle.  I have a cough, bleary eyes, and a tired body……but I’m otherwise healthy. No bubonic plague.)

On the plane from Paris to Detroit

I’m so tired of planes and airports! Lars, Nirin, and I left Madagascar at about 2:30 AM, got into Paris 12 hours later, and I said goodbye to the guys. They flew to Nantes, and I got on this plane (Air France to Detroit.)

Detroit?? Yes. I’m not sure how Detroit got in there when my destination is Seattle, but I guess it was a quicker flight so I booked it and another to Seattle. But now it turns out I have to go through customs in Detroit. The airport people in Madagascar couldn’t somehow give me a boarding pass for the Seattle trip. I’m hoping I don’t miss that flight!! 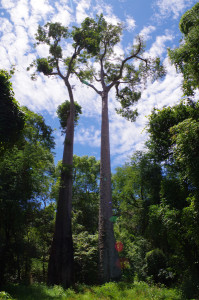 The Baobabs in Madagascar. Photo by Lars.

A couple more observations to share with you about Madagascar. Two weeks before we were leaving to go, Lars called. Bring clothes to give away….it’s the fourth (some say first) poorest country in the world. But I don’t have clothes to give away….and there wasn’t a lot of time to collect them. I took a different route.

Clothes and material stuff are not my things, so I decided to bring balloons and bubbles. Instead of clothing people, I would make them laugh!! And if they were hungry, I figured, I could always buy rice and vegetables once I was there. Turned out to be a great idea.

Early on we  made an appointment to visit a home for the handicapped and mentally-disabled (mostly adults)…..and by the time we arrived, there were around 25 people in wheel chairs and other obvious problems, waiting for us. I pulled my balloons and pump out of my backpack, and for nearly an hour, I twisted long skinny balloons into dogs and giraffes.

When it became clear that everyone loved getting the balloon animals (there was laughter and lots of smiles and ooh’s and aah’s), Lars and Nirin became my pumpers…..handing me a blown-up balloon as soon as I was ready to make another one. We were definitely a hit….and everyone got some kind of twisted configuration. (It’s a great skill that you can easily learn on Youtube. (I learned how to do it at clown camp!!) You can buy the balloons and pump on Amazon.

During the next weeks, we made balloon animals at an orphanage, several schools….and whenever we had an audience. I also carried bubbles and had kids giggling and chasing the bubbles whenever we had a chance. I gave away all nine little bubble-jars and wands….and brought joy into some difficult lives.

I’m going to miss the hundreds of shades of green in the fields and hills, the ready smiles, the masses of people just hanging out. But I am not going to miss the impossible traffic in Antananarivo, the capital city. It’s really bad. I honestly don’t know how we missed killing people who run in front of cars!!! I repeat: if you decide to visit Madagascar (please do), do not drive yourself.

In the three weeks I was there, I never met another American on the road or in a hotel…..and as I mentioned, my French isn’t. I was dependent on Lars and Nirin for translations; also for bag-carrying, and willing hands that helped me over holes and up steps. I did get to the American School on my last day. Only a handful of the kids are actually from the US, but the classes are in English. I talked about writing and books and a bit about my life to five grades. Kids, teachers, and staff were all welcoming. It was a fun day.

So here I am on the plane somewhere in the middle of the Atlantic. I’ll send this when I get to Seattle.

I wrote "Tales of a Female Nomad" to let people know that if they dare to dig up the buried person inside, to uncover the dreams and desires of the young man or woman they once were, they would probably realize that they can make some of those dreams happen.