I’m nearing the end of my Madagascar adventure, and I promised news before I left.

I’m here with my friends, Lars and Nirin, from Nantes, France. They’ve been here before, and I happily left all the planning to them. (Nirin’s father is from here, and Nirin knows the country well.) They’ve been taking great care of me….carrying my bags, holding my hand across high steps, and researching food (Lars is a professional chef and he checks menus before we go in!  ), hotels, drivers, and fun/interesting experiences. Yes, there is distant news of the “plague,” but nothing close……..and Nirin is a doctor, so I’m not worried. My sneezes and coughs are just sneezes and coughs!

First, it’s beautiful. When we arrived we left the crowded capital (Antananarivo) on day one. Most of this fourth-largest island in the world is gorgeous, rolling hills with picturesque villages and rivers and waterfalls tucked into the landscape; other parts are massive rocky and colorful cliffs . There are areas that are flat as far as the horizons on all sides. The sky is fabulous too. Blue with puffy, white clouds,  dark grey before the rain. This is the rainy season, and the whole growing-world is dozens of shades of green and pretty spectacular. 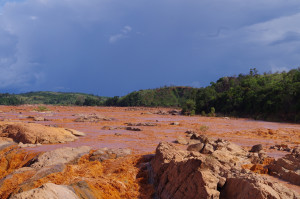 Crossing the River Betsiboka on our way to Majunga. Photo by Lars.

A vast portion of the soil is rich, copper-colored red. Roads are lined with red walls as though they’ve been carved with a giant scoop….and spectacular hillsides look as though they’ve been sculpted with massive pitchforks and carving tools, creating paintings out of the picturesque red soil.  A lot of the rivers, where people are constantly washing their clothes, are red…and so are the clay bricks that are the basic building material of many homes.

Oh, and while I’m on the washing topic, the countryside is filled with clothes drying (not much electricity in homes; even hotels often don’t have driers)….wherever you go there are drying clothes draped on fences, bushes, roofs, branches, cactuses, bannisters…. anywhere clothes can be spread or hung.
Much of the beauty of the varied landscape  is a result of generations of cutting down the forests which used to cover the island. There are very few forests left! It’s a serious problem….but I’ll get into that another day.

Second, it’s poor country. Villages are relatively far apart and packed with people…sitting on benches, leaning against sheds, selling rice (the Malagasy eat rice three times a day), vegetables, fruits, and walking, walking, walking with giant sacks on their heads, and babies on their backs. Or just standing, staring, talking, dreaming. There doesn’t appear to be much work around….other than people doubled-over planting, weeding, thinning the rice fields. And most homes are seriously in need of repair.

And I’ve never seen so many kids! Running free, sitting on the ground, wandering all over the place, crossing roads, without apparent supervision. Nirin says the average woman has six deliveries…..though not all the kids survive. Still, every inch of island is loaded with kids! I can’t stop wondering how many of them are hungry.

The kids and the people are beautiful, most of them black from east Africa, though the population has also come from Indonesia, India, and more recently, France. Everyone I smile and wave at, smiles and waves back.

Madagascar was a French colony until 1960; some French is spoken by almost everyone.  (Malagasy is the first language.) Unfortunately, my French is almost non-existent. I’m totally dependent on Lars and Nirin.

It’s frustrating. Most of you reading this know that my travel style is to talk to people, stay in homes, learn their customs, their lifestyle, their cooking. Not this time. We’re staying in nice hotels, eating in restaurants. I’m having a great time….but it is different from my previous travel. 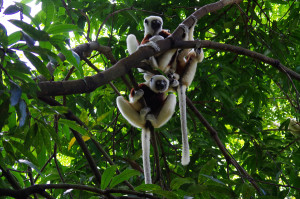 The lemurs in the National Park. Photo by Lars.

Really…don’t even think about driving!! Most of the country is pocked and washed out dirt roads….and even the capital city is a nightmare of stalled traffic, holes in the roads, people crossing in front of cars, cars cutting each other off if they’re moving at all. Even with Solo, I’m often worried we’re going to hit someone!!

That’s it for now. Tomorrow I am spending the day at the American school. I haven’t met one American since I got here….but I met a teacher from the school on the plane from Paris and she invited me to come visit. (For those of you who don’t remember, I write children’s books.)

That’s it for now. I leave the country around one AM tomorrow night.

When we finish lunch, Nark tells me he is a singer, and that last night, while I slept, he performed at a local nightclub from 10 to 1. He charades that he came over to tell me, but I was sleeping and he didn’t want to wake me up. Actually, what he said was, “You sleep, no wake.” Damn! I would have loved to have gone.