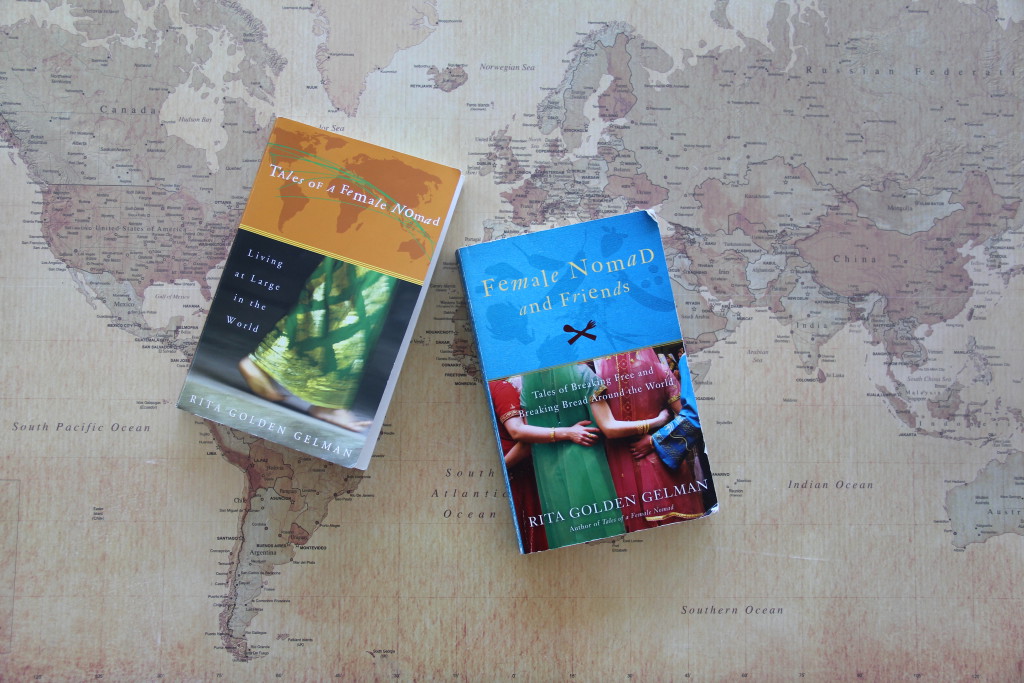 Tales of a Female Nomad, a book of my travels, was published in 2001. The last line, “I can’t wait to hear from you” has brought me thousands of letters and many new friends. I live in and love my “cloud community;” it’s filled with feedback, invitations, sharing, and stories. “Connecting” is what the book…and my life are all about.

Since the book was published, I’ve talked in hundreds of bookstores, colleges, elementary and high schools…all over the world. I’ve keynoted conferences, Skyped with book clubs and read my kids’ books to thousands of students (I’m still doing it; let me know if you’re interested). All because I signed off with an invitation.

The book has done well. I’m still getting daily e-mails and invitations to speak.  I usually say yes—partly  because I want to sell books and earn the speaking fees, but also because I want to encourage people to cross borders and have their own adventures. Traveling the way I do is easy and fun; and it’s filled with the “joy of connecting.” I’m convinced that if we had a population that interacted with other cultures, we’d be a much happier and respectful country. And I should probably add, a workforce more in sync with the global economy. But, that’s a whole other post.

Many have asked me, where have I been since the book was written?

First, I bought a car and promoted the book…in bookstores, in the media, and in homes in 41 states. I also drove around both islands of New Zealand, speaking in bookstores and staying with people in their homes–often Servas families. Tales of a Female Nomad has editions in Cantonese, Mandarin, Korean, and Polish. Most recently, there’s an audio book, read by me. None of the romance-language countries picked it up; I have no idea why.

Promoting is important but I’m not through traveling for fun. I’ve never had a “bucket list” of countries…I just kind of wait for something to come across my path.

One day when I was signing books at a Barnes and Noble in New York City, a man came up to me and said, “Rita, I’m a travel writer. If I tell you my favorite place in the world will you promise not to write about it?”

I had no idea where Suriname was.  I looked it up!  Suriname is on the north coast of South America, above Brazil. It’s one of those three little countries that were once French, Dutch, and British Guiana. Suriname used to be a Dutch colony.  I was intrigued by what I read. It’s independent now, but the first language in Suriname is still Dutch–in South America!

The population of Suriname is an amazing mix of:  indigenous people; the Dutch colonials; Africans (brought over as slaves by the Dutch to work the plantations and freed in 1863); Indonesians and Chinese and Indians (brought over as indentured servants when the slaves were freed); and even Jews who came up from Brazil and once had their own plantations and slaves! They’re all still there!

I went, of course. And I loved everything: the mix of people, the multiple religions, the variety of skin colors! And they all get along. If you’re looking for an unusual destination…go to Suriname. Servas has a lot of families there who would love you to visit them!

While I was still in Suriname, I got an invitation to come to the American Embassy School in New Delhi to talk about children’s books and writing. They paid my way and housed me. While I was working at the school, I got to know some of the teenage kids from the Vivekenand Camp 2 slum which was across from the school.

I loved those kids and ended up renting an apartment near them for several months, getting to know the kids and their families. (A while later I published an anthology of stories and recipes, Female Nomad and Friends, Breaking Free and Breaking Bread around the World, that includes 41 different authors and 33 recipes). All of the profits from that book are going to send kids from that slum to vocational schools. To date, Rotary in New Delhi has received thousands from the books sales. All the authors went along with the contribution…none of us ever got a penny.

I still correspond with some of the kids who got the scholarships. Many took computer hardware courses and they have access to computers, so they send me e-mails. Their notes always begin, “Dear Ma’am.” A lot of lives were dramatically changed because of those scholarships. So, do buy a few copies of the anthology. I’d love to keep those scholarships going.

A year or so after my India visit, I got an invitation from the international school in Arusha, Tanzania; and I spent many months there and in Kenya…hanging out, learning some Swahili (all of which I’ve forgotten), meeting elephants and lions and giraffes, and connecting with Maasai families. I grew to love the people I lived and interacted with. There too I started out at the international school talking about books to the kids and I ended up living with a Maasai family. I write a bit about them in the anthology. Two weeks ago a young man from my Tanzanian family was in the U.S. Allan is a safari guide and we spent a lot of time together. Let me know if you are thinking about a safari in Tanzania and I will send you Allan’s contact information.

More recently, the nomad book was published in Polish and the publisher brought me over to promote it. While I was there, I discovered something interesting. Hardly anyone in Poland makes eye contact on the street. Eye contact and a smile are key to my interactions, wherever I am, so it was jarring. After a week or so, I asked why and the answer was…during the Nazi occupation, it was dangerous to connect with strangers. You just never knew whom you were smiling at! And when the Nazis left, there were many years of Stalin. Now, generations later, people still don’t make eye contact on the street. But when I was invited into homes, through the efforts of the publisher, the people were warm and generous.

While I was in Poland, I chose not to go to Auschwitz or any other prison camp…I know what happened and had no interest in experiencing the depths of horror that would be depicted. I did go to the museum that honors Schindler of Schindler’s list. It was dramatic and touching…and a more positive experience.

I also spent several months in Turkey. One day, while I was in the U.S., three people, unconnected, told me I should go to Turkey. That felt like a sign…so I went and stayed with Servas hosts for several months…the first Turkish/Servas person I met was a young man in his twenties who lived in Izmir. He was the latest generation of a Jewish spice-trading family and we became great friends. Who would’a thunk that the first person I’d meet in Turkey would be Jewish! He sent me to Kuzi Doga…a non-profit organization in the north that’s working to save the wildlife habitat up near the Black Sea. (They were Servas too). I volunteered with them for 5 weeks–collecting scat in the mountains, banding migrating birds, accessing pictures from motion activated cameras attached to trees so we would know what animals used which paths. I even wrote a children’s book for Turkish children about saving the animals. (I have no idea if they ever published it). My favorite activity while I was in the group home with the other volunteers was conversing with the Turkish volunteers who didn’t speak English! While sitting at a computer that was clicked into a site that did simultaneous translations, I’d write in English…and the computer translated into Turkish. Then my new friend would write in Turkish and I’d get it immediately in English. That was fun.

Besides the comradery of the Kuzi Doga project–the food in Turkey was great…healthy, simple, and easy.

Oh, and I went to Peru, which came about in an interesting way. A few years ago I gave the keynote address to the annual conference of Global Citizens Network. They sponsor volunteer tours all over world and asked me if I wanted money for the speech…or a free trip. That was a no-brainer! I went to Peru and helped build a room on a school with five other Americans. The deal was that the community had to work alongside us. The six of stayed with six different families. It was fun. I also ate guinea pig and a lot of ceviche…and when I was in Lima, I jumped off a cliff, tandem, and paraglided over the ocean. I love flying!!!

Other, shorter experiences during recent years: I’ve spent a lot of time traveling with Lars and Nirin…you met them in the book when I was doing my dive course on the Indonesian island of Gili Trawangan. I’ve stayed with them in France (they live in Nantes), and we’ve traveled together in Malaysia, Washington state, California, Louisiana, Texas, Oregon, and New York. And just a couple of months ago (February, 2015), we spent three weeks in Madagascar together. It was great traveling with two guys who carried my bags, helped me across ditches, and did all the planning! Madagascar was beautiful and fascinating—with tons of indigenous plants that grow nowhere else—and of course, lemurs, those beautiful primates that leap from tree to tree. Nirin is a doctor and his father is from Madagascar, which made the trip deeper and the locals more comfortable with us. Lars is a professional chef; he chose the restaurants! This was my first challenging trip in several years and I was really glad to have two “young”—fifty-three-year-old—men with me. (I am 78!)

I’ve also been to Mexico multiple times. It was in Patzcuaro where I compiled the anthology (Female Nomad and Friends) with Maria Altobelli.

I spent several months in Antigua, Guatemala, while Mitch and his wife Melissa, were in the process of adopting two-month-old Cris, who is now 11! (I was able to help out with the Spanish.)

I’ve done a lot of house-and-pet sitting in various places in the U.S. I still have no home and hardly any possessions…so I move around pretty easily.

For those of you who are inspired to take off, my advice is: focus on the developing countries (they’re cheap and interesting), stay with families, take risks, learn how to trust, smile a lot! And eat everything you’re offered!

Thanks for hanging in. And happy journey, wherever it may take you! Keep in touch with me, this is far from the last chapter. More to come! 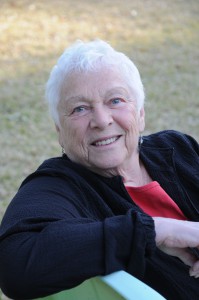 I cross the street and walk on the beach. The sky is filled with strips of pink and gray clouds. Way out at the end of the sea, a single fishing boat is silhouetting across the horizon, the only moving object in the bay.